By Kelly Bauer DNAInfo Chicago 1/4/16 The famous Stars Motel sign, which stood over Lincoln Avenue long after the actual motel was gone, has been torn down. 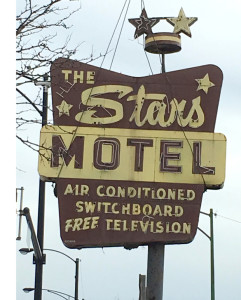 The sign sat at 6100 N. Lincoln Avenue, Chicago for decades, welcoming patrons to the Stars, one of many motels that dotted the stretch of road. The motel was air conditioned and had a switchboard and free television, the sign boasted.

But, like almost all of Lincoln Avenue's motels, the Stars was closed and demolished to make way for new developments in 2006.

The retro sign stuck around, hanging over a mostly vacant lot. For people like Rebekah Krause, who grew up walking by the sign and now works just down the street from where it was, it became a part of the neighborhood.

Krause enjoyed the '50s and '60s look of all the motel signs that dotted Lincoln, but the Stars was one of her favorites, she said.

"There were a couple different motels over there that also had kinda cool '50s signs that have gone down over the years, and that was the last hanger-on," Krause said. "When the [motel] went down, I was excited to see they kept the sign up for a significant amount of time after it was gone." The owners of the Stars had put the sign up for auction on eBay, but the winner never claimed it, according to Yo Chicago. The development plans for the property fell through and nothing was built. Later, local gardeners tended to a community garden on the plot around the sign.

Krause said she had begun to think the sign had been declared a historical landmark or had been preserved. She took a photo of it and would point it out to people.

But, this past Christmas Eve, the sign was torn down. 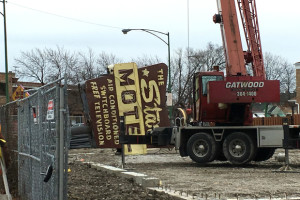 "It is something that I point out to people as a really cool little sign," Krause said. "It's obviously a very nostalgic thing. It's been there a long time. I'm kind of shocked it's gone.

"I was really sad to see it go. It was one of the cool things in the neighborhood."

Up until the end, Krause said, the Stars sign was in "shockingly perfect shape." Through the sign had been around for more than five decades, it had only seen "some sun damage" and discoloration, Krause said.

"I hope someone bought it or something, but I'm kind of assuming it just got torn down and tossed," Krause said. The property is up for ground lease or multi-tenant development through Baum Realty, with the memory of a great old sign.