By MClauss December 13, 2016
Share on Facebook Share on Twitter Share on LinkedIn Share via Email
Dixie Square Mall opened in 1966 at a cost of $25 million dollars. The Harvey, Illinois mall had a grand opening in November with 50 stores committed to the facilities. By 1968 the mall had 64 shops, including a Woolworth, a Walgreen’s, a Montgomery Ward, and a Jewel supermarket. 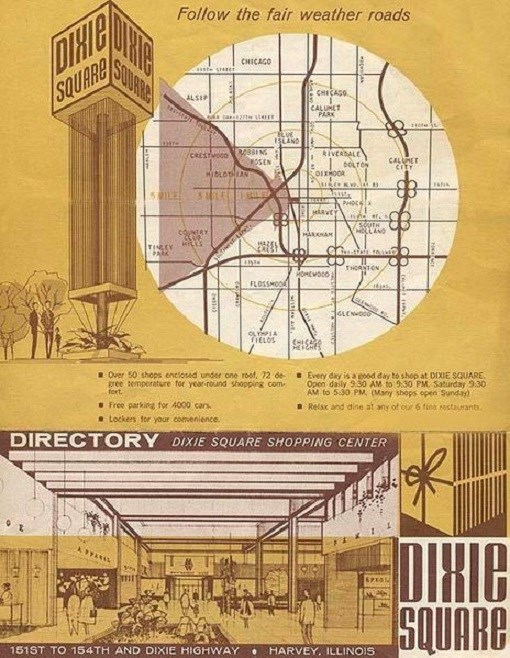 The sign was so huge it could be seen from the Illinois Tollway & the Calumet Expressway. The sign was illuminated by fluorescent lighting and was maintained by Alvin Linstrand, an employee of Triangle Sign.

Due to regional economic decline and an increase in crime, Dixie Square Mall would lose many stores between 1973 and 1976.

The mall went through a renovation in 1976 in an attempt to rejuvenate the business, but these attempts failed. By 1978 the mall was down to 20 stores; the final “anchor” store J.C. Penney departing in January.

By November of 1978, the entire mall closed its doors with the exception of two stores with exterior entrances. Walgreen’s finally left by the spring of 1979 and by the summer the last store, Jewel Supermarket, vacated.

Shortly after the final store vacated the mall, director John Landis used the mall in the summer of 1979 to film The Blues Brothers. A large portion of the mall was destroyed during filming of the scene, and when the film crew departed they left much of the mall in complete ruins.

The city district attempted to sue Universal Pictures for the destruction, but financial considerations forced the district to eventually evacuate the property altogether and terminate legal proceedings.

By 2010 the governor of Illinois finally announced a government grant of $4 million dollars to help demolish the mall. In January of 2012, the permits for demolition were finally issued.

But the memory of the mall and the iconic Dixie Square sign lives on.