One of this year's "Chicago 7" buildings deemed threatened by a local preservation group isn't a building at all.

Neon signs "throughout the city" made Preservation Chicago's annual list of the city's most endangered structures.

The signs, which often become local icons, were "a popular form of advertising from the 1930s to the 1960s," the group notes.

The cost of maintaining the mid-20th-century signs has reduced the number of working signs and led to the growth of "other less vibrant forms of advertisements," according to the organization. 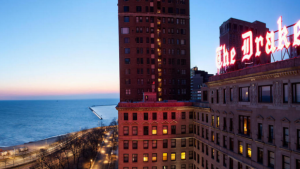 "There was a time when you would look down Randolph Street from Michigan Avenue, and see many, many neon signs," said Ward Miller, the group's executive director. He added that neon signs have barely missed making the Chicago 7 list in previous years.

Also on the list are 28 acres of a 115-acre manufacturing site that formerly housed A. Finkl & Sons in West Lincoln Park. The steel company moved to the South Side in 2013.

The mostly vacant former industrial site has several buildings with threats of demolition, Preservation Chicago said. Some area residents are asking the city to rezone a portion of the manufacturing district into a residential one.

Although most of the buildings on this year's list are vacant, one is still in use by the Chicago Park District.

Clarendon Park Community Center at 4501 N. Clarendon Ave. made the list because "extensive, heavy-handed and inappropriate alterations" have put it at risk, according to Preservation Chicago.

The almost 100-year-old building was built for access to what used to be one of Chicago's most popular beaches. The land between the building and lake was filled for parkland and Lake Shore Drive.

•Agudas Achim North Shore Congregation's synagogue, 5029 N. Kenmore Ave. The 1922 building was recently vacated, according to Preservation Chicago. More than 2,000 seats fill the sanctuary of the building. The synagogue is now for sale, and Preservation Chicago worries there might be plans to demolish it.

•Illinois Institute of Technology Main Building, 3300 S. Federal St. Funded by a leader of the meatpacking industry, the classroom building was completed in 1893. IIT is seeking a developer for an adaptive reuse of the building, and Preservation Chicago hopes the "Chicago 7" designation will help bring attention to the need for restoration. The building can be seen from the Dan Ryan Expressway.

•Pioneer Arcade and New Apollo Theatre, 1535-1541 N. Pulaski Road. The arcade is now owned by the Hispanic Housing Development Corp., but is vacant after plans to rehab the building went unfunded, according to Preservation Chicago. The theater is across the street and has struggled with deferred maintenance.

•South Side Masonic Temple, 6400 S. Green St. This is the second time the 1921 building has appeared in Preservation Chicago's annual list. In 2004 it appeared for continued vacancy and deferred maintenance.

Miller said 30 to 40 buildings were nominated this year. The seven chosen were selected because they are considered to be the most endangered out of the nominations.

Miller hopes the list brings recognition to the endangered buildings and creates interest in revitalizing them for Chicagoans.

"We're bringing about an awareness to attract individuals or developers who might have not seen these structures before," he said.