Wrigley Field's Jumbo Video Board Will Be a Gamechanger

From The Chicago Tribune: 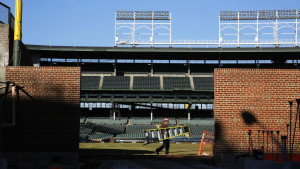 Steel beam by beam, metal spoke by spoke, construction workers at Wrigley Field are building the support of a structure that forever will change the game-day experience for Cubs fans.

The jumbo-sized left-field video board, the Cubs insist, will be up and operating for opening night April 5.

Cubs fans can expect a new feel to the ballpark, one that will be more modern, informative and entertaining — but also one that has left some fans fearful Wrigley will lose its charm.

It all started in Brookings, S.D.

There, employees of the company Daktronics, a maker of scoreboards and video boards since 1968, assembled Wrigley Field's 42-foot-high, 95-foot-wide board piece-by-piece in 14-inch by 14-inch squares the company calls "modules."

The employees then put 20 to 80 modules together to form "panels" that will display the images on the board.

Those panels were shipped recently to Wrigley Field, where over the next few weeks they will be assembled into the final product.

Just what will be displayed on the 13mm light-emitting diode (LED) board when it is up? How will the Cubs operate it? What benefits can it provide for fans?

The Cubs declined to discuss their plans for the board with the Tribune, and spokesman Julian Green did not respond to a query asking for a timetable on the board's installation.

But other teams said operating a video board is a constant operation that can involve approximately 20 people on a daily basis.

When the board goes up, it will be around the average size for major-league ballparks, Daktronics spokesman Justin Ochsner said.

To produce content for the board, the Cubs will likely have an operation behind the scenes that resembles a television show. That's how Jeff Szynal, the White Sox manager of scoreboard operations and production, described the operation at U.S. Cellular Field.

"We're like a mini TV studio," Szynal said. "We have a control room here in the ballpark, equipment that allows us to produce and create the magic in the ballpark. … It's a 365-day position. We try and create entertainment and educate people when they come to the ballpark. That's our main goal."

Szynal said the Sox have more than 20 people on game days devoted to their video board. Material for pregame and each inning is scripted with room for adjustment depending on the flow of the game. Szynal works with director of game operations Cris Quintana on what material to put on the board and when it should go up. That includes kiss cams, fan cams, fan chants, trivia questions, races, replays and statistical information.

"When our season concludes we begin thinking about what we're going to do in the next season," Szynal said. "So we develop a game plan of what works in different situations. … We lay it out for them very early in the fall and the winter and we fine tune it as we approach this time of season."

The Sox's video board is helpful to Melissa Andres when she goes to games. Andres, who lives on Kenmore Avenue just steps from where the Wrigley Field board will stand, said the board will enhance the Cubs' in-game experience.

"The one thing I enjoy more about the Sox games than the Cubs game is I do like looking at the video screens, seeing some of the replays up close," Andres said. "I'll enjoy the Cubs games a little more (with the video board)."

As for the sight of the board in the neighborhood and the sounds it may create, several residents who live around the ballpark (and don't own rooftops) say it's not a big concern. The Cubs said recently at a community meeting with East Lakeview residents that the board won't create excess noise for the neighborhood because the sound from the board is directed into the stadium.

"I think if anything it's going to block noise for us," said Jeremy Lee, who also lives on Kenmore.

Lee, a Cubs fan, said he is for the video board in part because it will help the Cubs make money through advertising — revenue the team can use to boost its payroll.

"How is it going to affect me one bit?" Lee said. "It's not going to shoot fireworks or something."

Video boards are money-makers for teams, considering all the ways they can convey sponsor messages. But the focus remains on the fans and what they want to see during games.

"The one thing we always have to understand is when you have 40,000 people and all different demographics, it's impossible to satisfy everyone with every presentation you put on the board and it would be silly to do so," Brewers Chief Operating Officer Rick Schlesinger said. "We're going to have enough features and presentations, even different things on the board over the course of a game to appeal to all those demographics."

One of the biggest complaints fans have voiced over the years was the boards were not used to show close plays or controversial calls, which is a restriction MLB placed on video boards. That changed with the implementation of baseball's replay-challenge system. Teams can now show the close calls to fans, which has helped improve the fans' engagement with the game.

"We did feel a sense of frustration," Schlesinger said. "If you were in a suite or in the concourses where the game is being broadcast you can see replay after replay on the television sets, and for a lot of our fans in the bowl, they were getting less than the perfect experience."

Said Hall: "It's changed the experience in a ballpark and it's made the video board that much more prominent."

Hall said there is more pressure on other major-league franchises that don't have a destination ballpark like Wrigley Field to use the video board to enhance the game-day experience, so the Cubs may not have to include so many features on their board.

"Everyone wants to go there; they're going to sell out," Hall said. "But at our place we need to find a way to make sure we provide more entertainment and more information at the ballpark than the average fan can get at home watching on HDTV."

Weston Joseph, who lives near Wrigley Field, said people need might need time to adjust to the video board.

"I think it'll be a year, maybe two years for people to get used to it," Joseph said. "They don't know what it's going to look like and they're already shooting it down. Everybody hates change until it affects them positively."