By MClauss February 10, 2017
Share on Facebook Share on Twitter Share on LinkedIn Share via Email
OAK LAWN, Ill. – Drivers passing through a suburb of Chicago
will still have to stop, but they'll no longer need to do so
"in the name of love." Oak Lawn, Ill., has removed comical
remarks in octagonal shapes it placed under stop signs in
an effort to get motorists to obey the law. 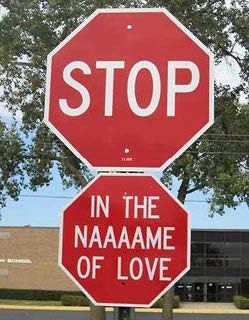 Mayor Dave Heilmann said the Illinois Department of Transportation
determined the signs violated the federal Manual
on Uniform Traffic Control Devices. He said had Oak Lawn
not removed the signs, the city could have lost federally
funded projects.

The public safety campaign to cut down on speeding
through stop signs began in September 2007. Slogans such
as "right there pilgrim," "and smell the roses," "do not pass
go" and "means that you aren't moving" were placed near or
under 50 stop signs.

At the time, Heilmann said he thought the remarks would
get motorists to pause, if for nothing else, to read the phrases.
Heilmann says IDOT's objection meant he had to junk
$1,700 worth of signs.

The cost was covered by the company 3M, which planned to
use them in promotional brochures, according to the city's winter
newsletter (Originally published 5/1/2008, Associated Press)