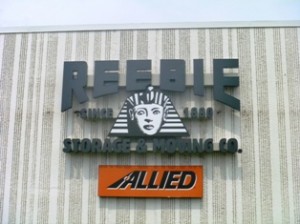 Founded in 1880, Reebie's logo evolved in 1922 when they had their 2325 N Clark building in Chicago designed in the Egyptian Revival style of architecture. Egyptology was very popular in the early 20th century as King Tut's tomb had just been discovered.

This was not just a warehouse facade. The attention to detail was myriad. On either side of the building’s entrance is a statue of Ramses II, representing the two Reebie brothers: William and John.  Beneath the two statues are William and John’s names written in the hieroglyphic equivalent of the spelling of their names.  Two other hieroglyphic inscriptions read “I have protection upon your furniture and all sealed things” and “I have guarded all your property every day warding off devouring flames, likewise robbery.”  All of the ornamental drawings for the Reebie warehouse were reviewed for accuracy by both the Field Museum and Art Institute prior to their implementation.

Even their early advertising slogan tied into their branding: “If old King Tut were alive today he’d store his things the Reebie way!”

The Reebie Storage Warehouse is one the country’s finest examples of Academic Egyptian Revival architecture. And Reebie's branding theme has gone along way toward customer recognition and certainly repeat business.