By parvinclauss@parvinclauss.com June 30, 2015
Share on Facebook Share on Twitter Share on LinkedIn Share via Email
Have you ever been stuck behind a truck and unsure whether to overtake it because your view of the road ahead is obscured? To overcome this potentially dangerous situation, Samsung has revealed its "Safety Truck," which allows you to ‘see-through’ the truck to the traffic ahead. 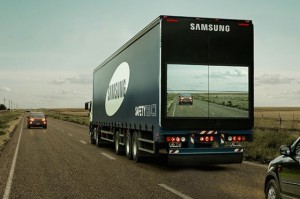 The Safety Truck is equipped with a camera on the front that displays its footage on four panels at the rear of the truck. Drivers are thus able to see the road ahead, allowing them to overtake the truck safely.

“So far Samsung has been able to confirm that the technology works and that this idea can definitely save the lives of many people,” the company writes in a recent blog.

Samsung Argentina hopes the deployment of the new trucks will reduce the high number traffic accidents that occur on two-lane roads, particularly when a driver is attempting to overtake the large vehicle. The company is currently working with the government and safe-driving NGOs to get the necessary permits and approvals.

The biggest hurdle Samsung will have to overcome if these Safety Trucks are to become widespread is cost. While the camera might be cheap for most companies, installing four displays per truck is expensive and would require major investment, The Verge reports.  June 23, 2015 | by Aamna Mohdin