Which Way To The Pub? A Brief History Of British Tavern Signs.

From James Hunt at Mental Floss:

The traditional British pub is part of the landscape of British life. At a recent count, there are around 50,000 of them in the UK, some of which claim to trace their lineage back as far as the 5th and 6th centuries, through the oldest verified by Guinness—Ye Olde Fighting Cocks in St. Albans—claims to have been established in 795 CE. 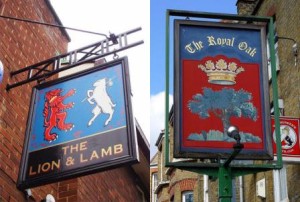 Because of their abundance, the names pubs take were designed to be memorable—but more than that, they were designed to be visual. Outside any traditional pub worthy of its title, you'll find a hanging signboard with a unique illustration that represents the name of the business. The practice is so entrenched that even new pubs copy it. But why do they exist at all?

The first British pub signs were created in the 12th century and were simple representations of tankards, hops and other brewing-related paraphernalia used to inform passersby that the establishments sold ale. This was Britain in the dark ages, when education—and in particular, literacy—was in short supply. Since most of the population were unable to read, pub signs were used to inform would-be customers that they could find a drink inside.

In 1393, King Richard II passed an act making it compulsory for pubs and inns to display his emblem, a White Hart, to identify them to the official ale taster, who would inspect the quality of the booze on sale. (Shakespeare's father, John Shakespeare, was one such inspector.) From that point on, pub signs diversified to reflect the names of their establishments, partly so people could distinguish them from similar drinking outfits in growing towns.

It's for this reason that the earliest uses of pub, inn and tavern names would reference the sign directly. People would arrange to meet "at the sign of the Eagle and Child" rather than "at the Eagle and Child." Patrons may not have been able to distinguish the phrase "Hart and Stag" from "Bear and Staff," but they could recognize a picture of these things whether they were a local or a passing traveler. 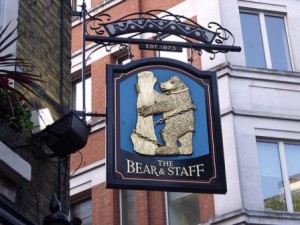 Or at least, they could most of the time. There are historical instances where signs were probably misinterpreted, resulting in an official change of name. An 18th century London pub known as "The Leg and Star" was probably supposed to be named for the prestigious Order of the Garter (whose emblem is a eight-pointed star) but was renamed by customers who looked at the sign and saw simply a leg (though it was clearly gartered) and a star.

King Richard II wasn't the only monarch to put his stamp on the public house, either. When King Henry VIII split the UK away from the Catholic Church in the early 1500s to establish the monarch as head of the Church of England, pub names stopped favoring religious symbols and began featuring images of royal figures and iconography. 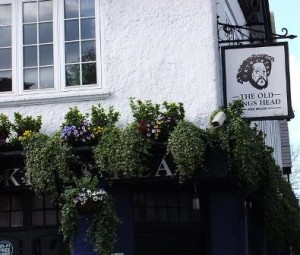 When King James I took the throne of both England and Scotland in 1603, he ordered that the heraldic red lion (one of Scotland's emblems) be added to all important buildings, including pubs. As a result of these actions, the two most common pub names in the UK are still "The Crown" and "The Red Lion".

Today the tradition remains intact largely out of respect for the past, but many pub signs do retain some functionality. Remote country pubs often use signboards to point the way to their doors from more trafficked paths. It's a part of British culture that's rapidly disappearing—more than 20,000 pubs have closed since 1980—but for now there are still more than enough around that you can take a moment to appreciate the history and symbolism behind a pub's sign the next time you see one.